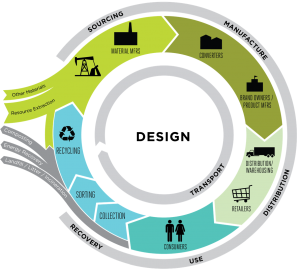 In Part 1 of this article, we discussed how landfill diversion rates are stagnant, single stream contamination is growing, waste stream composition is changing and asked the question: What can we do to make greater use of the more than 400 million tons of materials that are discarded each year in the U.S.? Part 2 described problems with the half-way solutions proposed for improving diversion through reducing consumers’ involvement in separation, including initial attempts to separate and recycle mixed waste and suggests that the EcoHub’s Circular Integration approach is a better model for 21st century smarter resource management.

In this final piece we argue that mixed waste processing—done right—can 1) ensure 100% participation, 2) divert up to 95% of materials from worthless disposal and 3) refocus consumers on things they do better, such as make purchase decisions…almost sounds too good to be true!

Contamination, whether it stems from organics or incompatible materials in the recovery stream, is one of the biggest problems facing business-as-usual (BAU) recycling. Advocates of source separation fear that contamination problems will be exacerbated by a move to a One Bin/mixed waste solutions. On the other hand, consumers love the idea that one bin is all that would be required for a mixed waste separation system—no more trying to figure out which bin a particular material belongs in! But what about contamination of the valuable recyclables?

Approaching 30 percent nationwide and growing, organics—food and yard waste—is the largest single category in the waste stream and is a reality that must be dealt with. To get the organics out, BAU advocates call for more of the same: more bins, more trucks, more money and more time (required of people to source separate). However, anyone who believes that more than a small percentage of the populace will somehow lovingly store its putrescent waste in the freezer, or put up with the inevitable stench of ambient temperature organics storage, while waiting the one to two weeks between collections, can politely be categorized as “optimistic”.

Under BAU, we are already seeing contamination rates in the double digits and hitting as much as 25% in places like Houston. Contamination drives down recovery rates, as well as the value of the recovered materials and is putting many recycling programs in the red.

So what’s Plan B? Won’t the single stream problems be made even worse if we move from source separation to One Bin, won’t there be even more contamination and even less material diverted?

Undoubtedly there will be increases of certain types of contamination. For example, some fiber that may not have been contaminated under single or dual stream will be contaminated by organics. But this additional contamination is overcome by access to more of the total fiber stream, as demonstrated in the table below.

To address this issue, EcoHub partners utilize a patented and approved technology for stabilizing and sterilizing recovered fibers, which was specifically developed for fast food recycling where fibers are routinely contaminated with food or moisture. We believe that wider use of this technology can overcome many of the concerns over fiber quality and availability that has been expressed by the recycled paper industry. Moreover, the MaxDiverter’s advanced separation technology effectively eliminates other cross-material contamination issues, such as plastic film, paper and glass ending up in the wrong place.

Because the resulting separated material streams are clean and consistent and volumes are fairly constant, mixed waste processing by EcoHub can more effectively provide the quantity and consistent quality being sought by end-product manufacturers, which is why numerous recovered materials partners want to be co-located with the MaxDiverter. We will turn 85-90% of the material coming through the EcoHub into consumer products (paper to paper, plastic to plastic), biofuel and soil amendment. Unfortunately, at present, there is still about 10% of the total waste stream where the highest and best use for these materials is thermal conversion to gas and liquid fuels through gasification or pyrolysis—such as synthetic sneakers and textiles (only that which is in the MSW stream), tires & rubber & mixed fines–so this process is included as well.

Focus on the Whole Materials Hierarchy and Implement Comprehensive Solutions

Every day, approximately one billion dollars of material value gets buried in the landfill or goes up in smoke because individuals—in spite of 40 years of education—would prefer to do something else with their time besides picking through their waste. However, by advocating a mixed waste approach, we are not green-lighting an even more wasteful society. Historically, the vast majority of solid waste education has been dedicated to the 3rd ‘R’: Recycling. With separation and diversion taken care of, we can refocus peoples’ bandwidth on the consumption decision, which is where humans have a ‘competitive advantage’ compared with the discard decision. Physics is a more effective and cost-effective separation strategy than people and One Bin collection is more economic, better for the environment.

From the Circular Integration perspective of a true sustainable materials management approach, everything in the waste stream is a resource that can, and should, be separated and processed into a higher and better use than landfilling or mixed waste incineration, which is essentially “a landfill with a match”.

And, EcoHub is just one piece of an integrated sustainable material management approach.

Many opportunities for smarter waste solutions abound: voluntary solid waste performance standards, such as SWEEP, Pay-As-You-Throw (PAYT) pricing, extended producer responsibility (EPR) requirements for certain manufactured goods, intelligent bins that tell you how full they are so an optimum number of trucks is dispatched, local recycled content procurement policies coordinated with nearby EcoHubs, and consumer education focusing on the top of the waste management hierarchy (Avoid, reduce, reuse), rather than the bottom: (Recycle, Recover, Garbage).