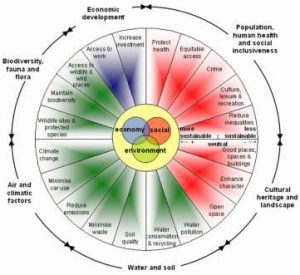 Most industry estimates indicate that the US generates over 400 million tons of municipal solid waste each year. Currently, over 60 percent of this waste is disposed of in landfills, with the rest recycled or incinerated for energy. The embodied energy and resources of still-useful materials that are thrown away, plus the methane generated from rotting organic material is responsible for up to 10 percent of greenhouse gas emissions in the US. Repurposing materials instead of entombing them in the ground has also been shown to generate ten times as much employment per ton of waste.

These energy, environmental and economic imperatives are core to why the Solid Waste Environmental Excellence Protocol (SWEEP) was conceived and point to a macro approach to a problem that those of us in the municipal sector deal with in a much more visceral way.

The community where I work, Keene, New Hampshire, is home to around 23,000 people. And, like people everywhere, when the can is empty, when the blouse is threadbare, when the bulb burns out, the only thought is getting rid of this thing that is no longer needed or wanted.

By any standard, the City of Keene has done a remarkable job of putting priority and resources behind the community’s environmental ethic. We closed our landfill in 1999 and opened a materials recovery facility powered by a landfill gas-to-energy generator. As a result, Keene’s recycling efforts went from hundreds of tons a year to thousands. This is a well-educated, socially active community that has a carbon emissions reduction plan. Yet in spite of our efforts, we hover in the mid-20% range in our diversion rate and we send the remainder to a landfill clear across the state for burial.

What do we do? How do we turn this dynamic on its head where 75+% of our discards are repurposed and ever-decreasing amounts of resources require burial?

Keene is not big enough on its own to effect any national policy changes. But by participating in the SWEEP standard development process, we can be at the forefront of the dialog to set new performance targets for business as usual. The status quo has been enormously profitable for certain sectors of the industry, but it is ultimately unsustainable. Through SWEEP, we are aiming to show that economically- and environmentally-sound decision-making are not mutually exclusive concepts.

Technology offers up some compelling views of where we may go. In Keene, for example we still run a dual stream MRF, which has mostly been eclipsed by single stream facilities. We produce superior quality material compared to single stream, but we are still only processing a quarter of the waste stream. I suspect a decade from now we’ll look back at both single stream and dual stream facilities as the beginning of mechanical, optical and human sorting systems that paved the way for separation facilities that handle the various components of the waste stream while also addressing the issue of collection efficiency as well as probably the most important aspect of getting resource recovery rates that capture the vast majority of the waste stream- convenience for the public.

There need to be conversations between the public sector and the private sector to build an understanding of where our interests intersect. Just talking about things with a common dialog is a good start. SWEEP is a spoke in a big wheel of making human society more sustainable. But without spokes, the wheel collapses and we need well-constructed spokes now more than ever. Someday we’ll look back at our current practices and shake our heads that we were so inefficient for so long. But at least now we recognize we need to do something because we know we can do better.