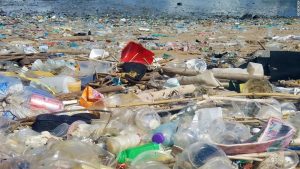 “China Fallout Continues” reads a newsletter subject line that just popped in my inbox – yet another headline addressing China’s import ban on foreign waste that has dominated recent news in the waste and recycling industry circles. It’s safe to say that everyone has heard by now that China will no longer accept some key pieces of the U.S. recycling stream that have long enjoyed their home across the globe. And yes, it’s unsettling. It’s also been a bit surprising to read the preponderance of “glass half full” sentiments that suggest it’s actually a good thing, and now the U.S. solid waste industry will set out to build an unprecedented amount of new processing capacity and create domestic markets for recyclables. I don’t buy it. At best, it feels like a rough few years ahead before that – if that – happens. But there’s one ripple effect that is very positive, and not getting enough attention: the Chinese contribution to marine plastic pollution just diminished. Significantly. That’s a big deal that has been lost in all the doom and gloom.

China has been the only major home for mixed plastics bales, or 3-7 bales, which tend to be “the leftovers” after the high-value PET and HDPE (and sometimes PP) rigid containers have been sorted out of our commingled waste streams. These bales contain a fractional amount of valuable, recyclable plastics and a significant amount of unrecyclable plastic waste with negligible value, and China has been a major boon to our recycling efforts since they have the low labor costs to manually sort out that fraction of recyclable plastics and send it along to the robust Chinese plastic reclamation market. No more. Those days appear to be gone, and we’re seeing signs of the death of the 3-7 bale. Doom and gloom.

The silver lining to this centers around the fate of the unrecyclable portion of those bales. The Ocean Conservancy raised eyebrows in their 2015 report Stemming the Tide, identifying China as the largest source of marine plastic pollution. The vast majority of marine plastic pollution, the Ocean Conservancy explains, starts as terrestrial plastic pollution, and the vast majority of terrestrial plastic pollution occurs because the plastic waste has no fit and no value in the recovery system, therefore becoming relegated to the unmanaged disposal that is so prevalent in China and Southeast Asia. The interesting part is that the report notes that China generates “relatively low waste per capita”, meaning the only way it makes sense for China to be the world’s largest contributor to marine plastic pollution is to consider that they have been importing the rest of the world’s plastic, including the low-to-no-value waste plastic in our 3-7 bales. Like it or not, it’s hard to argue that the U.S. hasn’t been complicit in China’s biggest-in-the-world contribution to plastic in our oceans. No more!

So what happens now? Probably more plastic in U.S. landfills, and that’s only a good thing when we consider that the modern waste management hierarchy places the landfill as the second-to-last rung, firmly above the ocean. Whereas China and many other parts of the globe have disposal infrastructure that absolutely pales in comparison to the highly-regulated, highly-engineered landfills of the U.S., keeping plastic waste ashore in the U.S. guarantees a much lower probability that it finds the marine environment. The landfill industry in the U.S. won’t win many awards for being the new destination for much of our plastic waste – and I’m not going to argue that they should – but China’s shake-up of the recycling world should be viewed as a tradeoff rather than a death knell. Less recycling, but less trash in our oceans. The U.S. waste and recycling industry – not to mention the manufacturing industry – absolutely must grow its waste sorting technologies, reprocessing capacity, and market demand in order for us to enjoy a world where so many plastics can be considered to be recyclable, and I’m with the “glass half full” crowd: it’ll happen. Eventually. In the mean time, let’s temper the doom and gloom a bit and be happy for the oceans.