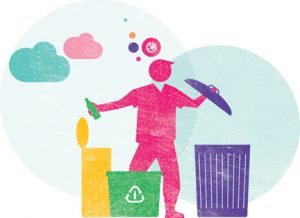 In Part 1 of this article, we described challenges posed by the aging structure of the recycling industry, the disconnection of a generation, and the changes in society’s attitude toward sorting waste. As my team works to implement SWEEP at Cornell and I juggle my senior year of classes, I’m wrapping up my summer experience with the second half to this conversation. In this follow-up piece, I explore more deeply my generation’s behavior with regards to waste and recycling and discuss leading strategies in the industry in order to answer the question on everyone’s minds: what is needed to develop a pathway toward sustainable waste management?

With policy driving rapid change in foreign markets and economics continuing to drive up recycling costs, the impact on domestic solid waste infrastructure is a two-front war.

Decisions made half a world away in China drive market behavior in the US, causing struggle in a waste management system that lacks sufficient bandwidth to keep up with the market’s radical changes. On top of that, a new breed of consumers threatens domestic recycling as we know it. Given that the national diversion rate has remained flat at just under 35% for several years, understanding points of leverage in this stagnant system is vital to its revitalization. I’d like to argue that in order to build a resilient framework for the future, we must first understand those who will inhabit it.

Previously, I discussed how in 2016, 43% of U.S. “Millennials” were skeptical that their curbside contents were recycled (it is unlikely that this number has declined since then). This distrust and anemic involvement in the current system of recycling is characteristic of this new generation and is behavior we see beyond just solid waste. Being in the 18-34 demographic, Millennial voter turnout rate remains the lowest of all eligible voting groups. Likewise, with encroaching global issues like plastic-filled beached whales, the impending doom of climate change, and political mischief, it is proving increasingly difficult to believe that small-scale actions like recycling or voting will undo the slew of problems our generation has inherited. However, the issues we face today are pressing and, if we are to develop solutions, everyone must play their part. That being said, putting increased stress on “Recycle,” a solution that is already viewed skeptically by Millennials, is a recipe for failure. By contrast, millennials are much more receptive of the “Reduce” and “Reuse” message.

Clearly, Millennials don’t interact with waste the same way as their baby boomer counterparts. While other generations are more willing to put stuff in the bin, it seems Millennials are more apt to buy the stuff that comes out the other end, and there is significant advantage to these decisions. With the whole world in our back pocket and the voting power of our dollar, we digital natives either consume to express support or don’t consume at all. In fact, research done by The Shelton Group found that 70% of millennials made a decision to purchase a product over another based on its environmental practices alone. Choices like these should not be overlooked, especially since Millennials have a significant amount of consuming power. For instance, in 2017, it was found that Millennials spent $200 billion annually and were projected to spend $10 trillion in their lifetimes. This relatively new market behavior has come to be known as aspirational consumption, and companies who are “standing for something bigger” are gaining momentum.

With regards to solid waste, seeing the new potential of a material throughout its life cycle is circular and sustainable, the new and hip trend amongst millennials and iGenerationals alike. It’s no longer about buying stuff, but rather consuming through the experiences and ideologies they represent, and we constantly see new industries that have identified this demand. Manufacturers such as PepsiCo, Unilever and Walmart, among others, have publicly expressed commitment toward sustainable packaging with some promising 100% recyclable material as early as 2025. Statements like these have been well-received and is a practice that is becoming adopted across the nation. Now that businesses are responding to an evolving generation of consumers, it is time for waste managers to re-engage and educate the public to show neo-recyclers that what they do has an impact as well. After all, the recycled material to make these attractive products has to come from somewhere…

But how do we get this generation involved? If one thing is clear, it’s that Millennials engage when properly engaged. For example, in several primary races in Philadelphia this year, Millennials saw up to a 29% increase in voter turnout between the 2014 and 2018 primaries due to recent political attention and hotly contested seats. Similarly, correctly framing the situation and having continual coverage is a good start. Show us the problem and how our actions influence results, and the rest will play itself out. Luckily, there are many industry leaders who serve as examples for what good engagement looks like. As part of their zero-waste campaign, DC’s Department of Public Works wraps their collection vehicles with local artwork, grabbing people’s attention and connecting sanitation to the neighborhoods they serve. Some waste managers form partnerships with local foundations such as participating in breast cancer awareness. In Argentina, a plastic waste labyrinth was installed to bring the plastic crisis in the public spotlight.

In addition to public attention are tangible incentives. By giving people’s waste monetary value, participation grows and national attention expands (especially among a generation with shallower pockets than their Generation X counterparts). Programs like bottle bills and their respective deposit systems continue to hold impressive recovery rates despite being introduced in the 1970s. However, companies like Plastic Bank and Goodr are going as far as implementing blockchain into recycling programs, empowering people who deal with their waste through cryptocurrency compensation. Other systems, like Recycle Rally, move beyond financial compensation. Instead, schools and local communities are provided with free resources, cater a recycling program to their goals, and then receive digital rewards along with leaderboards to compare their efforts to national numbers – a platform that can transcend K-12 classrooms.

This works hand in hand with education which is essential for closing the gap of intergenerational understanding and preparing for an altering waste stream. According to Waste Dive, 16% of the millennials who don’t recycle don’t do so because they’re confused on what is recyclable and another 12% don’t sort waste due to infrequent collection. Clearly, more should be done to combat “waste illiteracy,” and what better way than through technology? Numerous recycling apps have been created by municipalities and companies alike to engage their communities and keep them informed on things like acceptable recyclables. Receiving information by the swipe of your thumb is a luxury that millennials take for granted and when something isn’t readily available when called upon, we seldom search for it. Uzer, a French start-up, has designed a recycling barcode scanner that instantly tells you how to recycle a product given its different components and rewards through vouchers and discounts on a connected smartphone app. These apps and other mobile platforms, in addition to simplifying recycling labels, are a huge step in the right direction.

Even though education and engagement of the general public is vital, the same can be said for the industry itself. Despite new innovations and solutions to combat the current waste crisis, the realm of recycling is fragmented and communication is lacking. If waste managers wish to involve would-be recyclers, they must collaborate with each other. Recycle Across America and other efforts to standardize the industry would not be possible without the input of leaders across the country, something that SWEEP recognizes and promotes as it continues to develop.

We millennials do care about our impact. As mentioned earlier, it dictates our daily decisions more than ever before. But as a community, this is not the best we can do. Like the children of Allenstown Elementary so eloquently depicted, we must come together as a nation to make our mark. We must join together to lay the groundwork for sustainable waste management and take the first step together, not wait for a few progressive cities to test their luck. Only then can we build resilient and adaptable communities for generations to come.